During the summer of 2014 Mckeown undertook a commission based on the events of WW1 and a poem called Does it Matter by Siegfried Sassoon, for the UK's premier TV station Channel Four

During the summer of 2014 Mckeown undertook a commission based on the events of WW1, with a twist. The commission particularly asked artists to consider the and reflect on disability and WW1.

Mckeown working with a fantastic team based at the School of Computing at Teesside University, went on to produce 'Ghosts' for Arts Admin/ Xenoki Production who were in turn commissioned by the UK's Channel4 / 4OD and 14-18 NOW. The work is a commemoration of WW1 - Please click here for more detail. The work is part of a major cultural programme entitled 14-18 NOW which is taking place across the United Kingdom to mark the centenary of the First World War. For more detail 14-18 Now WW1 Centenary Commissions Website. Ghosts is can be seen on 4OD and was presented at the Unlimited Festival at the London South Bank Centre in September 2014. It  can also be viewed on the panel to the right and will be shown at film festivals and other events.

Ghosts features a virtual cast of disabled veterans from across the spectrum of World War One as they awake and prepare for the day ahead. Set in a landscape filled with the artefacts and objects of war, the characters dress in the uniforms of various armies, talk, cook and tend to pigeons.

Taking inspiration from Siegfried Sassoon’s 1917 poem, Does It Matter?, Mckeown and four other contemporary disabled artists reflect on the legacies of WW1 and disability in Britain today. When two million newly disabled British ex-servicemen returned from the First World War, society’s attitudes to disability had to change

Inspired by photographs from WW1 and produced using motion capture and state of the art animation techniques, with a bespoke music score, Ghosts is a captivating, provocative and ultimately moving film.

In the aftermath of the war cities witnessed enormous numbers of their young returning, alive but permanently disabled. Embedded in the life of the times, each family had an injured uncle, father or son walking the streets, in a scary pre NHS world with no state support. Ghosts is a timely comment on the millions disabled by WW1; we are their descendants, they are our ancestors.

In a series of short films produced by Artsadmin and Xenoki,  contemporary disabled artists present unorthodox, irreverent and unexpected takes on the legacies of war and disability in Britain today.

You can watch the films now at channel4.com/ww1shorts

The shorts were also screened at Southbank Centre’s Unlimited festival on 2 September 2014.

Does it Matter? (1917)
(Copyright Siegfried Sassoon (1917) by kind permission of the Estate of George Sassoon)

Does it matter?—losing your legs?…
For people will always be kind,
And you need not show that you mind
When the others come in after hunting
To gobble their muffins and eggs.

Does it matter ?—losing your sight?…
There’s such splendid work for the blind;
And people will always be kind,
As you sit on the terrace remembering
And turning your face to the light.

Do they matter?—those dreams from the pit?…
You can drink and forget and be glad,
And people won’t say that you’re mad;
For they’ll know you’ve fought for your country
And no one will worry a bit.

For more information on the other commissions in the series see Channel Four and the links below:

Oh! What a Lovely Lovely Ward by Katherine Araniello turns sentimentality on its head in a playful and absurd reimagining of a wartime hospital. The wounded and war damaged wait their turn to have their morale lifted by Matron while a jolly war song is bashed out on an old piano and a frenzied special effects team tend to the injured.

In Soldiering On, Jez Colborne collaborates with Mind the Gap to explore Jez’s fascination with the pomp and ceremony surrounding war and its brutal reality. A music video set in an old cinema, with Jez performing an original song at an upright piano, it explores his desire to be part of an experience he’s locked out of because “learning-disabled people don’t go to war”.

Claire Cunningham’s Resemblance is a solo performance created around the act of assembling (and disassembling) a crutch in the manner of a soldier assembling his gun. Claire enacts a ritual that mirrors the act of creating a weapon of destruction, while actually creating an object of support.

In Breathe Nothing of Slaughter, Tony Heatonexamines the potent symbol of the memorial against the realities of those disabled by the devastating effects of war. Heroic, enduring, Adonis-like bodies waving flags or in prayerful repose are set in stark contrast to archive images of blackened faces, rotting feet, malnourished and broken bodies.

Co-commissioned by 14-18 NOW and Channel 4. Produced by Artsadmin and Xenoki.  Part of the Unlimited programme.

14-18 NOW is a major cultural programme taking place across the United Kingdom to mark the centenary of the First World War.

Perceptions of the war have been shaped to a great extent by the artists of the time, including poets, writers, painters, sculptors, photographers and film-makers, many of whom served, and who reflected on the war and its effects. Their work had a profound and lasting impact.

Now, one hundred years later, we are inviting contemporary artists from the UK and around the world to explore the resonance of the First World War today.

Working with cultural organisations across England, Wales, Scotland and Northern Ireland, 14-18 NOW commissions large-scale special projects. These are selected to encourage people from every community to reflect on how the First World War has shaped today’s world and our attitudes to conflict now.

Many of the events will be free, and our interactive website is designed to encourage the active participation of young people. Events take place on both a national and regional scale, across all art-forms and digital media

For each of these key dates, 14-18 NOW will present a season of commissioned events around the UK over 6-8 weeks.

14-18 NOW is an independent programme hosted within Imperial War Museums and receives public funding from the National Lottery through the Heritage Lottery Fund and Arts Council England.

Simon Mckeown’s animation follows disabled veterans moving through a landscape filled with the artifacts and objects of war, as they prepare for a new day.

Does it Matter? A series of short films produced by Artsadmin and Xenoki for 14|18 NOW & Channel 4 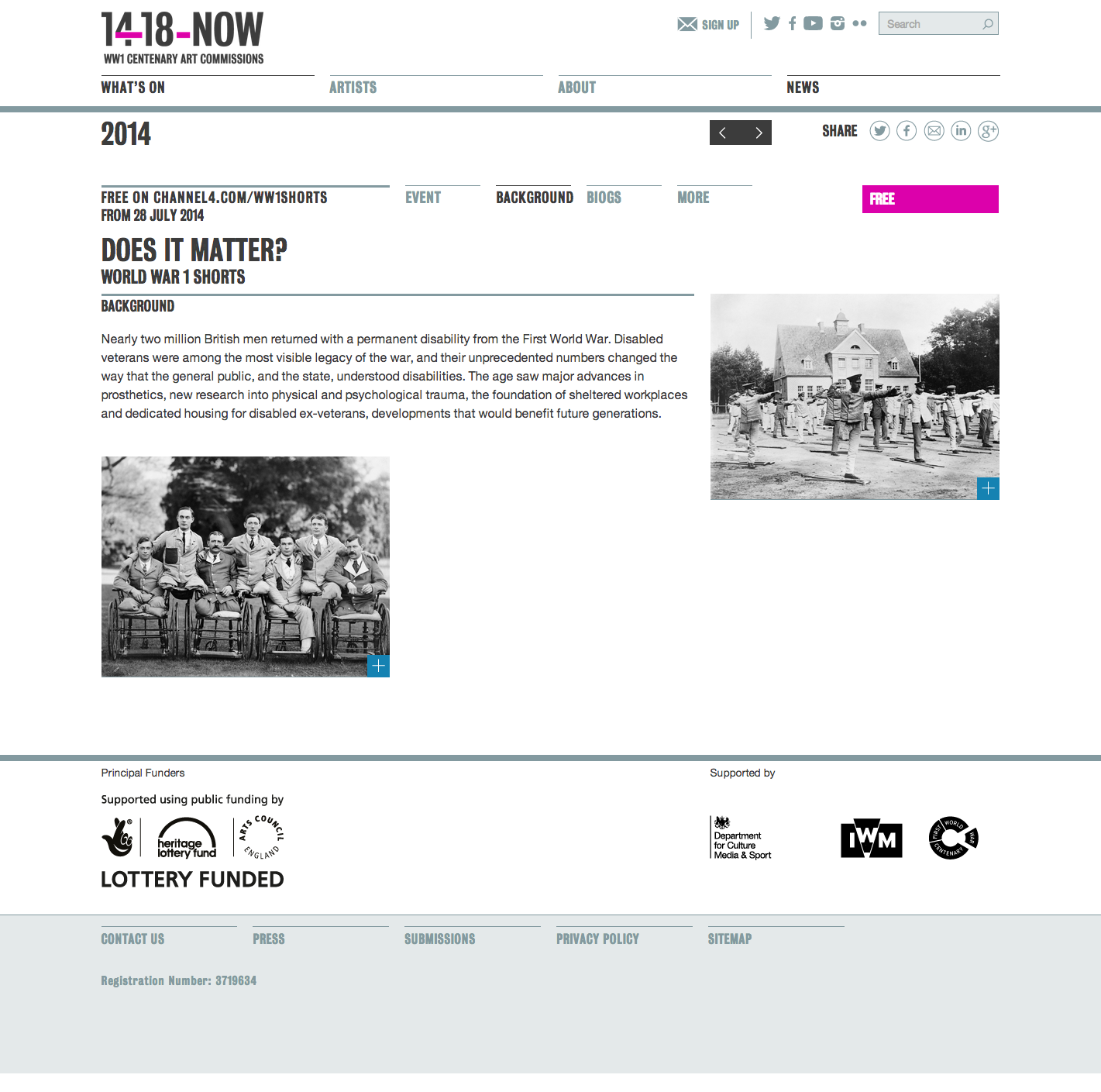