Mckeown designed the visuals for Prometheus Awakes, a large scale outdoor event for two of Britains most successful festivals - GDIF and SIRF

Prometheus awakes was concieved by Bradley Hemming, Director of Greenwich and Docklands International Festival (GDIF) during 2010. This largescale specatacle was from the onset envisaged as a disability led art work on a grand scale. One of Catalonias most famous exports, the experimental theatre company, La Fura dels Baus were invited on board as partners with particular skill in ariel work as well as providers and drivers of the 10m tall biped (an other equipment) which became centre pieces to the event.

Mckeown became involved in this early period and the final work went on to be fully commissioned during 2012 as part of the London 2012 Festival and the Cultural Olympiad which supported the Olympics.

During the period, Bradley Hemmings was appointed co-director of the opening cermony to the Paralympics and the event went onto be managed by London's fantatic Graeae Theatre Company with GDIF.  Artist Simon Mckeown worked with the team to provide the final visuals which supported the overal project over many months. Projected live onto the Queens House in Greenwich the visuals were project mapped in place and carefully controlled to sync to the complex live action, which featured especially commissioned music and  audio effects, real flames and large cast of volunteers and professionals, disabled and non disabled moving and interacting with the huge biped provided by La Fura dels Baus, both in the  occuring in front of the spectactular Queen's House.

Prometheus Awakes then toured to one of Britain's oldest and most successful festivals in Stockton, in the North East of England. The Stockton International Riverside Festival (SIRF) then hosted the event, again to a sell out audience. Mckeown recut the visual material and remapped it to the victorian high street face found on Stockton high street. Projection facilties and support were provided by the Hemel Hempstead based XL Video with Mckeown working directly with their crew.

"Reminiscent of the giant figure who featured in Take That’s Progress tour, huge Prometheus towering in front of the Queen’s House in Greenwich is a vision to behold. He walks around as the crowds part, his body brilliantly lit against the dark sky.

After setting himself down in a corner, other performers take centre stage - acrobats dangling from silks suspended high in the sky from a giant crane, participants dressed in white boiler suits who navigate a large hamster wheel-style contraption while whooping and cheering in a slightly eerie fashion against the rich backdrop of the Royal Naval College and Canary Wharf, and finally a wall of more than 40 men and women suspended from a huge crane in a lattice formation.

Complete with fireworks, a light show and stunning digital projections on to the Queen’s House facade, the whole show is a visual feast executed by a daring, creative and enthusiastic cast, which hits exactly the right note with the audience of late-night revellers."

This huge event was co-commissioned by GDIF and SIRF and recieved reviews including the prestigious UK's Guardian Newspaper Culture Section and the Stage. 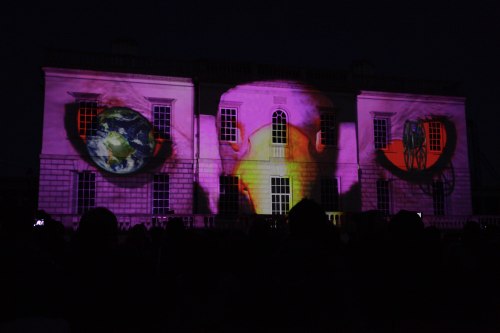 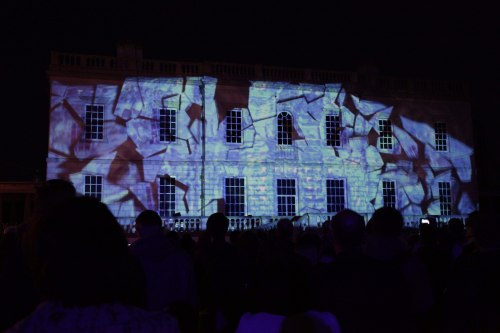