Simon worked with Unfolding Theatre and several other organisations as part of the Creative Fuse process. Unfolding Theatre and its director Annie Rigby had a history of innovative theatre which combined with a strong collaborative practice, as seen with their work Putting the Band Back Together - a work in which audience members become active participants in the musical work..

Over a period of months, meeting with a diverse team of academics, Unfolding decided to create a new work to be exhibited at the Great Exhibition of the North in the summer of 2018. Multiverse Arcade is inspired by a question asked to young people at Eton College, “What will you do when you're in charge?” Annie believed all young people should be asked this question - however, in Multiverse Arcade the question became 'What would you change?'. 51 young people from Young Writers’ City at Excelsior Academy and Queen's Hall Youth Theatre collaborated with Unfolding Theatre to make Multiverse Arcade.

Simon assisted in the final digital design for Unfolding utilising small computers called Raspberry PI's, mini video projectors, sensors and a till receipt printer, whilst arranging for this bespoke solution to be produced at Teesside University. 16,701 visitors came to see Multiverse Arcade during the Great Exhibition of the North and over 3,500 people recorded their voices. Since it was created in 2018, 1000s of young people have added their voices to the arcade as it tours.  We hope gets young people thinking about the changes they want to see in the world! 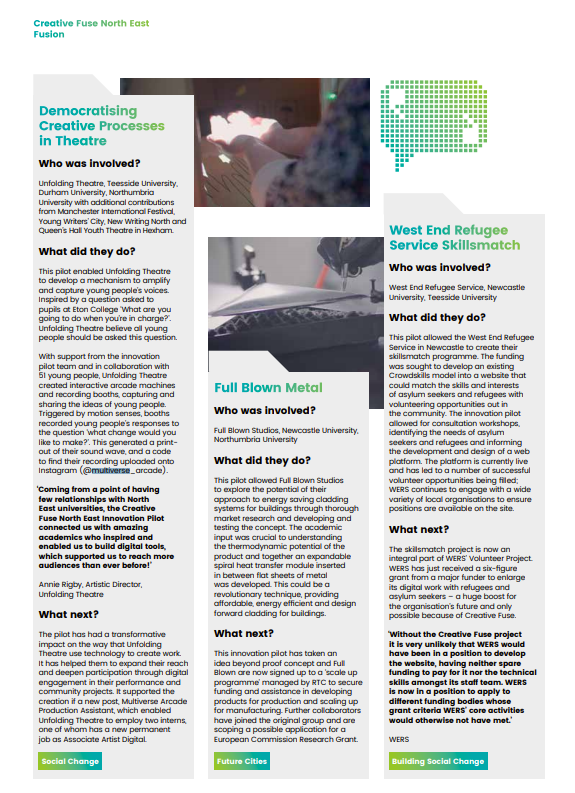 Creative Fuse North East sought to unlock the potential of the creative, digital and tech sectors to drive innovation & growth of the North East (UK) economy.

The UK’s Creative Industries are booming. They are one of the fastest-growing sectors in the national economy – 7.1% in 2016–17 with an overall increase of 53.1% from 2010 to 2017 – and the third most valuable creative sector behind the US and China.  DCMS statistics estimate its Gross Value Added at £101.5bn for 2017, employing three million people: that’s 1 in 10 jobs categorised as within the creative economy. The RT Hon Ed Vaizey MP, said in 2019 that,

'I have seen the benefits of strong creative, digital and IT (CDIT) industries at first hand. But of course, creative arts and technologies have a much wider value than purely economic impact within the CDIT sector. Ideas and approaches from creative practice stimulate innovation in many other sectors, from health and wellbeing to smart data, from automotive engineering to future cities. And then there are the more intangible benefits: the vital way that creativity can enrich our quality of life, stimulating a sense of place, identity and wellbeing and supporting social cohesion ... Creative Fuse North East has been exploring some of these issues through its focus on the ‘fusion’ of creativity, culture and digital technology in North East England...'

Drawing on the combined expertise of all five regional universities, Creative Fuse North East has set out firstly to map the CDIT sector in the North East and then to catalyse new ways of working between businesses, freelancers and academics. This has been approached through 30 innovation pilots, funded by the Arts & Humanities Research Council, a range of ERDF and Arts Council-funded business support activities, including innovation workshops and student placements, and then over 25 monthly CAKE (Collaboration and Knowledge Exchange) events bringing together a diverse range of businesses, freelancers and academics. The core of the project has been to explore the concept of Fusion – the combination of ideas and skills from creative, design and technology disciplines – to provide businesses with a potent mix that can support growth in terms of staff, products and sustainability.

Delivered through a truly unique partnership between the North East’s five universities – Newcastle, Durham, Northumbria, Sunderland and Teesside. Academics will work alongside industry, cultural organisations, charities and the public sector, to explore how creative, digital and IT firms can have a sustainable future in the region adding value to the region’s broader employment base. PLease see below for the final report. 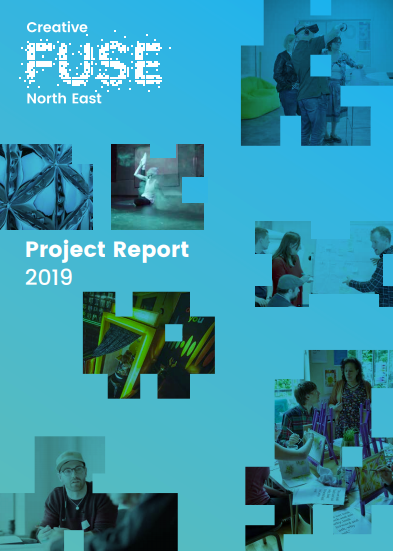